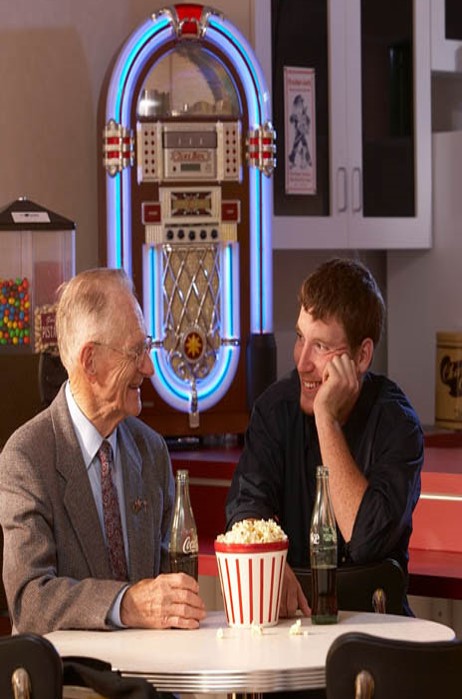 When he graduated from college in 1936, John Smith's first job was teaching in East Jordan.  "I enjoyed the area," he said.  "I got acquainted with the kids, of course; hunting in the fall was great, snowshoeing in the winter was lots of fun.  I had a good time with the people, basically."  At East Jordan Public Schools he met Marjorie Smitton, a home economics teacher.  They were married in 1938 in Grand Rapids.

After serving three long years in the U.S. Army during World War II, John built a career in schools throughout Michigan.  First in East Jordan, then Charlotte and Potterville.   John and Marjorie adopted two children. Marjorie had an eye for architechture, which led them to remodel numerous houses in each community.  In 1973, the Smiths moved back to East Jordan.  They decided to "settle down" and built their home on Peninsula Road.

Because of his professional background, John Smith knew the importance of a good education and the value of investing in young people.  A modest and humble man, John quietly supported numerous projects to benefit East Jordan kids over the years.  He was a life-long Rotarian, including 40 years as a member in East Jordan.  In fact, he donated the first $20,000 to implement the Rotary International Strive program in East Jordan High School as well as $100,000 to build the Rotary Skate Park for kids in East Jordan.

In 2005, his generosity led him to establish a scholarship fund within the Community Foundation. Each year, the East Jordan Rotary Opportunity Scholarship Fund provides several scholarships to overlooked but hardworking students who graduate from East Jordan High School. Scholars are selected based on criteria, which John helped to establish, including financial need, school attendance, motivation, and potential to succeed.  The scholarship is renewable for up to four years if the student shows progress and has passing grades.  When John passed away in 2016, at age 100, his estate enriched the Fund and will allow for a greater number of students to receive this valuable four-year scholarship.  This is exactly the kind of impact he imagined and a fitting tribute to a man so devoted to the education of the next generation.

With information from "Quiet Generosity Has Enormous Impact", by Jane Booze, published in The Citizen Journal, January 2005.

Is a legacy gift right for you?  Learn more about leaving a legacy through the Community Foundation.