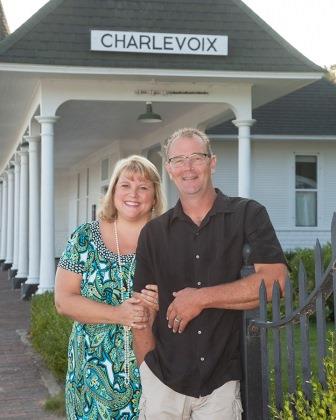 Amy McKinney and Tim Wieland have known each other since they dated in High School, but it wasn’t until she returned to their hometown decades after leaving that they found each other again.  Family is the reason she returned to Charlevoix and the reason Tim stayed: “we live here because of family, but we love it here for many, many additional reasons,” Amy says.

Family also prompted the Wielands to become involved with the Charlevoix County Community Foundation.  When her mother passed away, Amy looked to the Community Foundation to establish a fund that would honor her life.  “The Fund is a way to continue her legacy locally and it’s very meaningful for me and my sisters,” she says.

Just a year before losing Amy’s mother the family felt the loss of Tim’s father, Tom Wieland.  They felt that giving in honor of this generous, hard-working Charlevoix farmer helped them honor him too.  “It’s how we were raised,” explains Tim. “You give back any way you can when given the opportunity.”

When they created their estate plan, Tim and Amy included funds held at the Community Foundation that support causes they care about, including the Ruth Schofield McKinney Memorial Fund. “Creating an estate plan is the exact opposite of upsetting, planning ahead for when we’re gone gave us tremendous peace-of-mind,” shared Amy.  “Knowing that after we are long gone, we will still be a part of this community and still be making a positive impact through the Community Foundation is comforting to us,” Tim adds.  The Wieland’s legacy gift will enrich this special place that this local couple calls their hometown, forever.