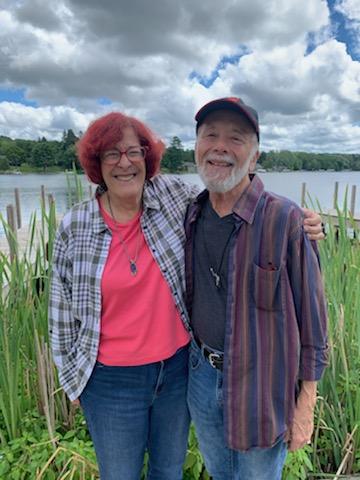 Anita and John are artists, though they are mostly retired now. They met through their shared interest, married, and combined their businesses in the early 90s, serving metro-Detroit clients from their gallery in Milford.

They closed the business in 2006, which was originally founded by John’s parents in 1955, when Anita’s parents were aging and needed support. John and Anita moved to Honduras, where Anita’s parents’ ran a school for 500 children. In addition to more traditional subjects, they also taught photography composition, music, and acting.

After three years in Honduras, the school was stable, so Anita and John moved back to the United States. They now live in East Jordan much of the year and travel to Florida for the cold months. “We love East Jordan. We love our neighborhood, our wonderful neighbors, and particularly the walk along the Lake to get an ice cream downtown,” says Anita. “East Jordan is centralized – we love to take rides in our convertible to Petoskey, Charlevoix, Central Lake area, even Elk Rapids, Traverse City, or Gaylord,” notes John.

Years of being customer-focused made a transition to community-focus quite natural for John and Anita. They reached out to the Community Foundation to formalize a future gift - a plan to support the parts of the community they care about most after they’re gone. “From our time in Honduras, we realized that hope is very important to those who are going without or struggling. Hope can be offered through services that show a path forward or by incorporating some enjoyment alongside the requirements,” Anita explains. “For example, the students we worked with were very receptive to learning about art and music, which gave them a reason to keep coming to school and sustained them during hard times.”

The future gift Anita and John will make through the Community Foundation is a custom work, totally unique and designed to meet their charitable goals.

Learn how you can leave a legacy with the Community Foundation.